The 23rd Monaco Yacht Show is to be held from Wednesday the25th to Saturday the 28th of September 2013 (Open from 10am to 6.30pm) and the event is promising to be bigger and better with more luxury superyachts (for charter and sale), designers and yacht builders exhibiting than ever.  You can see the video here.  Also, here is more on Monaco as a location to visit for chartering.

What is the Monaco Yacht Show?

The Monaco Yacht Show is held annually in September at Port Hercules, Monaco and brings together professionals from the international luxury yachting sector. Companies and individuals include luxury yacht builders, brokers, designers, equipment suppliers, and service providers and they gather to show off the latest and greatest luxury yachts for sale in Monaco.

The Monaco Yacht Show is the only yacht show worldwide which is exclusively devoted to superyachts for sale of at least 25 meters in length. It is the largest floating luxury yacht display in Europe of super and megayachts. This makes the Monaco Yacht Show premiere showcase for Super Yachts.

The Monaco Yacht Show started off as a superyacht broker oriented show in 1991. Since then over the last 15 years it has evolved considerably, benefiting from tremendous growth in the international yachting industry. Monaco is also perfectly placed in the heart of the Mediterranean and now with one of the largest luxury yacht harbours worldwide. The Monaco Yacht Show also has the great privilege of having H.S.H. Prince Albert II of Monaco as its patron who provides a great deal of ongoing support.

Built in aluminum and steel, this 55 meter vessel is based on a consolidated and tested Benetti
platform, yet rich with innovative contents, especially with regards to partitioning, interior design, decor and fitting out.

With Ocean Paradise, Benetti gives further proof of their second to none capability in interpreting and adapting to Owner's requests. Many elements make this yacht an example of custom avantguard solutions: from the furnishings to the highly elaborate illumination plan, with the use of novel architectural solutions and the combination of both transparent and opaque materials that emphasize the traditional relationship with the sea, or a more contemporary look and feel, as required.

All this is coordinated and managed by BEST (Benetti Exclusive Sea Technology), the proven domotic system adopted by the yard aboard several vessels and very much appreciated by Owners and crew.

Many of these innovations aboard Ocean Paradise have been specifically developed by the yard's
technicians and designers, based on specific requests by the Owner – a dynamic young businessman from Singapore – who was always closely involved in the phases of design and construction.

The Benetti Ocean Paradise was also conceived to fulfill the specific need of the charter activities,
but despite this is characterized by several notable one of a kind elements, such as the designer's
research for solutions that guarantee communication between adjacent environments and especially with the sea, even while relaxing in the main saloon or lunch area. This was obtained by the intense study and development of the height of the opaque elements, and the adoption of plexiglass and crystal materials, with the absence of bulwarks in the floor to ceiling windows in the salon.

Minimalist, but never cold, and always connected with the sea: these were some of the guidelines
given by the Owner for the development of this project. The Benetti team of interior and exterior
designers interpreted the desires of the Owner, bringing it to an ideal fruition from both the technical and esthetic/functional points of view.

There are four guest cabins, all located on the lower deck, with access from a central hall connected to the main deck foyer. Each cabin has its own spacious bath, and a view of the sea is guaranteed by ample portholes. The Owner's suite is located on the forward portion of the main deck, and stretches the full width of the yacht. This environment, both in size and position, is also unique for aspects such as expansive bathroom suite and a side terrace (balcony). Here, like in the rest of the vessel, an intense study by the lighting design team has created just the right atmosphere.

This results from the use of LED and LED RGB, skillfully hidden in the cladding and managed by sophisticated, yet simple to use systems managed by exclusive Benetti BEST System.

Light is of primary importance throughout the entire Ocean Paradise project, both natural light,
filtered through ample openings in the yacht's structure, in addition to transparent solutions such as the crystal skylight, and artificial light, with temperature controlled color to match the natural light.

Special attention has been paid to the passageways used by the Owner, guests and crew, skillfully
separated but always able to ensure rapid service by the personnel to all shared living and private
areas.

There are numerous solutions adopted to exploit the spaces and volumes designed to guarantee
comfort and contact with the sea aboard the Ocean Paradise: one is the aft beach area with adjacent relax zone and sheltered service areas, complete with a large platform created by lowering the transom door.

To create an open air area, yet hidden and independent from the tender and toy launching area, the Benetti designers have developed a system of lateral openings, complete with a mooring platform for jet-skis or the custom made 6.2 meter tender which is stowed inside the garage while under way.

The rescue boat is house in it’s own forward garage so hidden from the view of the guests and
protected from the seas. The jet-skis are mounted on the foredeck in a separate area, but offering a tantalizing view from the circuit used by the Owner and his guests.

The Owner, who also has interests in interior design, was a very active participant in the design of the secondary ambient too, with the objective of creating a natural and relaxing atmosphere, where encased Zen gardens appear, with the successful intent of infusing perceptive serenity. In bringing the natural greenery of plants aboard using transparent surfaces that double as display cases and natural light openings for the interior, the Ocean Paradise gains a particularly eclectic atmosphere.

For his yacht the Owner has commissioned details such as the wardrobe door handles (designed by the winner of a design competition), light switches, light fixtures, automatic hatch and panel latches, chromatic contrasting leather stitching, completely clad leather interiors for lockers, and the many “hidden” storage areas perfectly integrated among the various environments.

The design motive of every area, even the smallest and least visible, has been customized by the
Owner to ensure coherency with the entire project's inspiration. This is also true on above decks,
where we find an oversize swimming pool with waterfalls on the sun deck, and furnishings that
suggest natural environments and facilitate the view of the sea. There is also a gym on the sun deck which dominates the ocean, and a mini bar with DJ console.

Technically, Benetti Ocean Paradise - FB263 keeps to a classic configuration: steel displacement hull, with a displacement of 651 tons and 710 gross tonnage; two CAT 3512C (1765 kW) motors with 2,367 horsepower, which always guarantee the best yacht's performance and navigation efficiency at every speed. Cruising range is 4,000 nautical miles at an economical cruising speed of 12 knots, with an easily reachable top speed of 17 knots and a fast cruising speed of 15.5 knots using 85% of the available propulsion power.

The bridge is fully equipped with the “Integrated Bridge” Benetti technology, enabling the crew to
quickly and easily monitor all onboard systems, guaranteeing safety and easy repair access when
necessary. Using touch-screens, the system displays the state of all onboard systems, managing
both alarms and function monitoring. From the bridge the crew has complete control of the vessel
and is immediately informed of any malfunctions, even from remote areas of the vessel. This advanced system, adapted by Benetti, also allows monitoring of the AC systems to rationalize the
system's energy consumption while underway in varying atmospheric conditions.

The bridge also has modern design elements, as well as some classic in the form of the stitching in the leather work to complement the advanced technology.

Completely clad in leather with contrasting stitching and several different illumination settings, the walk-around instrument console and separate chart table, make the Bridge seems a unique design piece itself. The exterior of the wheel house allows undisrupted access from the wing station from where the Captain has excellent visibility for docking operations, and severs as an exterior crew lounge as well.

- With the highest growth rate among the world's builders of super and mega yachts, Benetti, founded in 1873, the oldest Italian builder of motor-yachts, is an icon of timeless Italian styling combined with world class quality in construction.
- Each yacht is unique, built around her Owner's needs and desires.
- Benetti designs, builds and markets two product lines: the Class Range with composite construction from 93' to 145', and Custom with steel and aluminum construction over 45 meters in length.
- Benetti has three sites: Viareggio (77.707 m2), Livorno (219.440 m2) and Fano (48.837 m2).
- Headquarters for Benetti is in their historic building in Viareggio, Via Coppino 104, with offices in Livorno, Fort Lauderdale, Dubai and Hong Kong.
- Benetti is part of the Aziumt/Benetti Group, the world's largest private capital luxury nautical group. 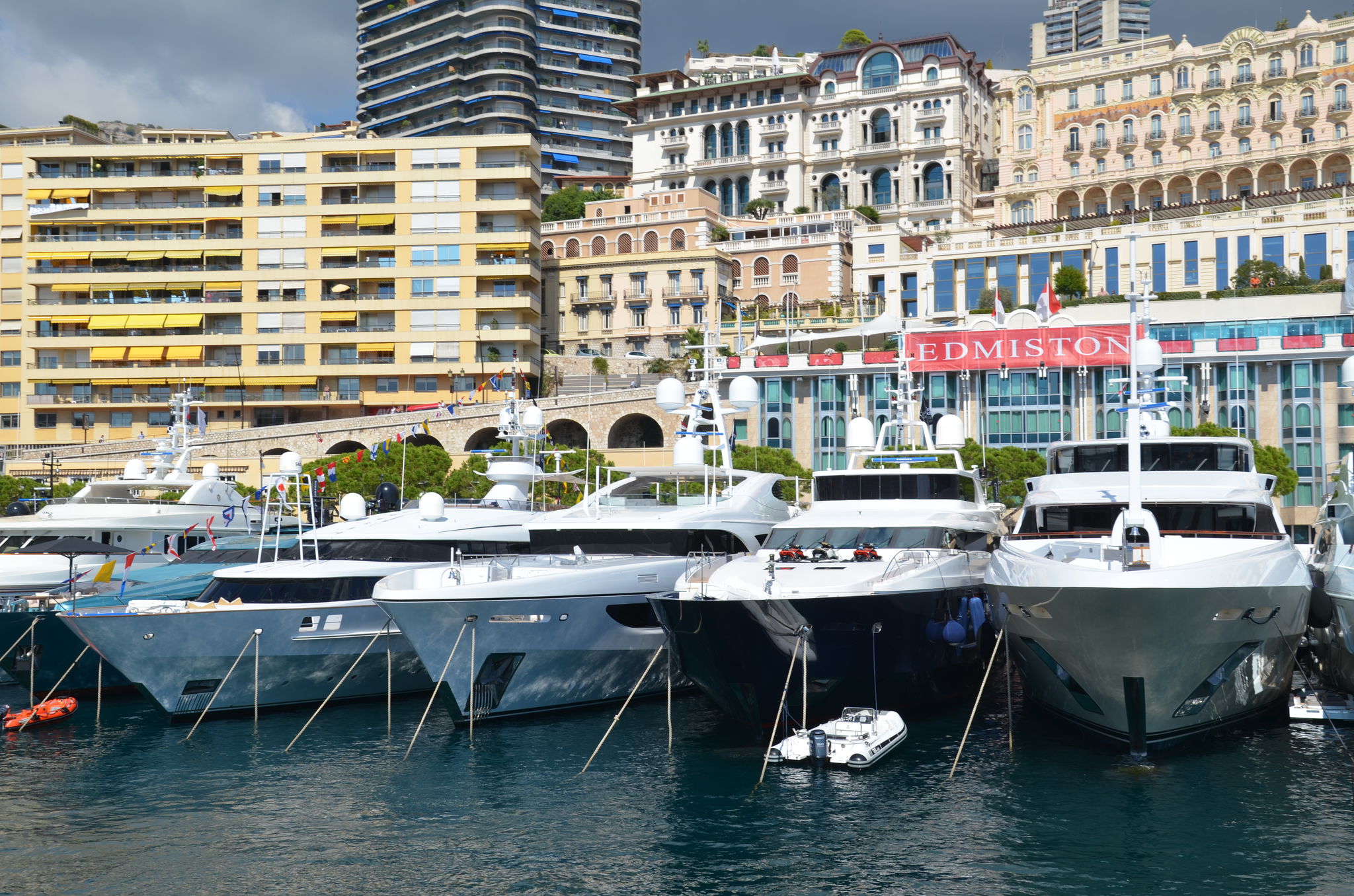 A high-end quality of the show guaranteed by the strict selection of the exhibiting companies: 500 major companies in the luxury yachting and 105 spectacular super and megayachts afloat exhibited every year.
With a record attendance of 33,000 participants in 2012, the MYS is the unique occasion in the year to meet the top managers of yachting companies and discover the latest high technology nautical products and luxury yachting services.
During the four days of the show, over 80 events are organized by the exhibitors in the palaces of Monte Carlo or onboard the yachts.
PHOTOS C.COPYRIGHT - AMERICAN COMPANY INTERNET COUNCIL LLC - DIACONESCO.TV -

A big thank you to all the people some of the companies that received us so nicely on the stand or on their unit during our visit to the Media Lounge Monaco yacth show 2013.